Recently I re-read some of my older posts, and honestly, I was cringing pretty hard. I’m not going to rewrite them simply because I’m way too lazy to, but I think the main issue is that I was trying to be too formal. In hindsight, having to evaluate movies on so many different characteristics was a pretty unnecessary burden that I put on myself; it forced me to include things into my reviews that I simply didn’t really think as super important. In addition, it really made me think about what and how I was writing, which is extremely draining for me (welp I’m studying CS not English). This is why you probably noticed that I haven’t written anything in a really (like really) long time.

There’s two main things that I want to change about my reviews going on forward. First is the content. I don’t want to be restricting myself to writing about specific content, so I’ve decided to make future posts literally like a stream of my thoughts, with no drastic attempt to organize it into a cohesive argument (of course, I’ll still organize to some extent so that I’m making some sense). Second, I’m going to start writing from a more informal, personal perspective. It may not as be pleasant to read as before, but it sure is much more pleasant for me to write :).

With that out of the way, let’s get to something that’s interesting. Here’s a picture of my roommate with an enlarged head: 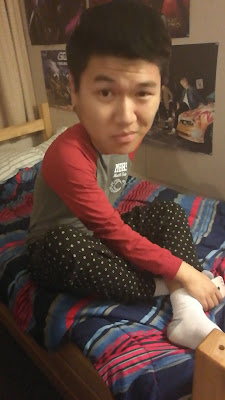